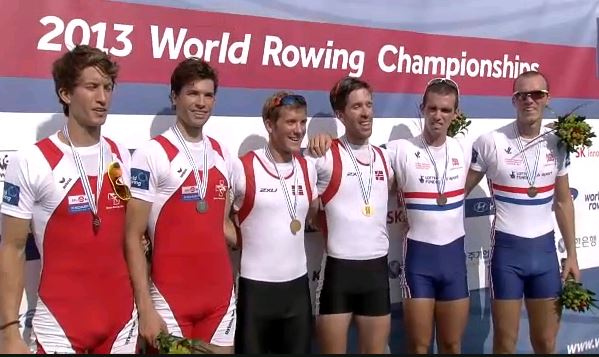 GULL til Are og Kristoffer

Kristoffer Brun – Gold
“This was unbelievable race for us. We stayed cool during the middle part of the race and pushed hard during the last 750m. The last 20 strokes were unbelievably hard. Before this final race we said, ‘we’ll give them hell’ and we delivered. It’s an insane and unbelievable feeling to be World Champions.”

Simon Schuerch - Silver
“Before the race we were expected to fight with Great Britain, Italy and Norway. After the semifinal we thought gold could be possible, but we are very happy with the result. The regatta is really sensational, the course is fantastic and the organisation is much better than we expected.”

Peter Chambers – Bronze
“We couldn’t do anything else. It’s the worst I’ve felt after a race ever. We left everything out there.”

Lightweight Men’s Double Sculls (LM2x) – Final
With France not able to contest this event due to an injury this field had opened up as no boat was dominating. The only hint to who today’s medallists could be were the semifinals that saw Simon Schuerch and Mario Gyr of Switzerland clock the fastest time. At the start Andrea Micheletti and Pietro Ruta of Italy flew out of the start and kept their rating up through to the middle of the race. This is a new Italian duo for 2013 and the first time for quite a while that Elia Luini has not been in the boat.

Half the race had been rowed and it was Kristoffer Brun and Are Strandli of Norway who were the closest to the Italians with Gyr and Schuerch moving on up. Gyr and Schuerch had come to the double after racing last year in the final of the Olympic lightweight men’s four.

In the final sprint Italy were hanging on for dear life, but could not find that extra gear. Instead it was Brun and Strandli who were truly looking impressive. They were maintaining long strokes and a powerful 37 stroke rate pace. At the line Brun and Strandli had become World Champions. Move over Tufte, here come the lightweights. So who are Brun and Strandli? The duo came together in 2008 at the under-23 level and they have been plugging away ever since. They finished ninth at the London Olympics deciding that they had every intention to continue on to Rio. This medal will give them a big boost.

Switzerland came through into second and an exhausted Peter and Richard Chambers of Great Britain held on for third.
Results: NOR, SUI, GBR, ITA, GER, GRE

B-final
Poland had only just missed out on making the A-final in Thursday’s semifinal and they were expected to do well today. And they did. Artur Mikolajczewski and Milosz Jankowski of Poland set off at a cracking pace with the United States in hot pursuit. The field remained tightly packed together and the sprint to the line saw just two seconds separate the top three boats. The Muda twins from the Netherlands had out-sprinted Poland to take first.
Results: NED, POL, AUT, UKR, DEN, USA