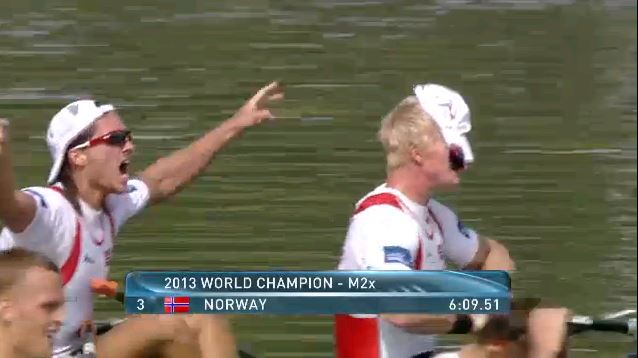 Nils Jakob Hoff (M2x) – NOR – Gold
«We didn’t believe it until the last stroke. Then I lost my mind. This is the first gold medal in the double at the World Championships for Norway’s men’s rowing since Olaf won in 2003. This is a fantastic fresh start for Norway and we need to thank our Swedish coach Johan Flodin.»

The World Rowing Championships is the climax of the international rowing season. Hosted for the second time in Asia, the Tangeum International Rowing Regatta course in Chungju, Korea proved to be a hit both for the competitors and the spectators.

Men’s Double Sculls (M2x) – Final You have to love the predominantly Korean crowd. No matter who was racing the grandstand supporters kept up their drumming and cheering. For the first final of the day, Norway’s Nils Jakob Hoff and Kjetil Borch got out the quickest. Hoff and Borch finished seventh at the London Olympics and they vowed to come back stronger this season. Together they had recorded the fastest qualifying time in the semifinals.  Hoff and Borch were up against Michael Arms and Robert Manson of New Zealand who come to these World Champs after making a clean sweep of the 2013 World Cup season. Also in the mix were Rolandas Mascinskas and Saulius Ritter of Lithuania who have been regular medallists this season along with 2013 European Rowing Champions, Italy.
By the middle of the race Hoff and Borch had pulled away to an aggressive open water lead with a complete line forming behind them made up of Argentina, New Zealand, Lithuania, Germany and Italy. Hoff and Borch continued to lead with now Mascinskas and Ritter on attack.
In the mad scramble for the line Hoff and Borch kept their cool and kept in front. Mascinskas and Ritter, at a 43, had earned silver and Italy’s Francesco Fossi and Romano Battisti had done a flyer to take bronze.
What a celebration from Hoff and Borch – their first World Championship title. Hoff stood up in the boat lifting his oar to salute the crowd. The duo had finished just six seconds outside of the World Best Time. Results: NOR, LTU, ITA, GER, ARG, NZL